Windhoek – Namibia’s transport sector can create more jobs, should the country take development of the railway network as a catalyst of economic development seriously. This is the view of Dawie Moller, the Managing Director of D&M Rail Construction – a company specialising in the construction, rehabilitation and maintenance of our country’s rail network.

Moller was responding to an recent article in  “Die Republikein” newspaper which argued that the country’s ailing railway network needs urgent attention. He agrees with this assessment that rail plays a critical role in Namibia’s economic growth.  “Government’s vision to transform Namibia into a logistics hub connecting SADC to international markets relies heavily on the service offering to the transport chain. Having a good rail connection will translate to increased volumes of cargo movement, increased trade and increased revenue for Namibia,” he said.

He lauded Government for the investment it has made in the country’s transport infrastructure over the years and for prioritising further investment in railway infrastructure in particular under the current National Development Plan 5 (NDP5). 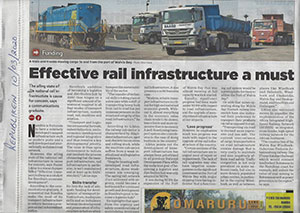