Duineveld – The community of the small southern village of Duineveld (90 km south of Rehoboth) this weekend received a welcome relief of food parcels to alleviate its plight.

Consisting of around 115 households, mostly headed by old age pensioners, the community of duineveld mainly survives on casual and ad-hoc labour, agriculture and in particular the sale of skins and hides on the national roadside. However, the onset of the Cov-19 pandemic and the subsequent lockdown put paid to that income as they could no longer travel to find work and the community faced an uncertain future.

“An emotional facebook message from one of the residents caught our attention and we could not stand idly by when our fellow citizens cry out for help,” says Dawie Moller of D&M Rail Construction, which came to the aid of the community by providing food parcels, distributed through the local church organization. “Our CSI policy makes provision for support mainly to the communities in which we operate and we have supported worthy causes in towns such as Kalkveld and Otjiwarongo in the past to the tune of over N$2million in addition to making a concerted effort of recruiting our workforce from those communities. However, after reading that facebook note we had no option but to heed that call and provide support to this community which is outside of our normal areas of support. We trust that this will go some way towards easing the predicament this community finds itself in,” Dawie says.

The donation was delivered to the community on Saturday, 18 April 2020 by D&M Rail Construction’s Public Relations company, Usi Hoebeb Communications (UHC) and was received by Reverend Severius Majiedt, Consulent Pastor of the Uniting Reformed Church in Southern Africa, Duineveld Congregation.

The parcels were packaged by the church council and delivered to each of the 115 households in person to ensure that no duplications occurred and most importantly that the State of Emergency regulations were adhered to. The community expressed its gratitude to D&M Rail Construction through Reverend Majiedt. 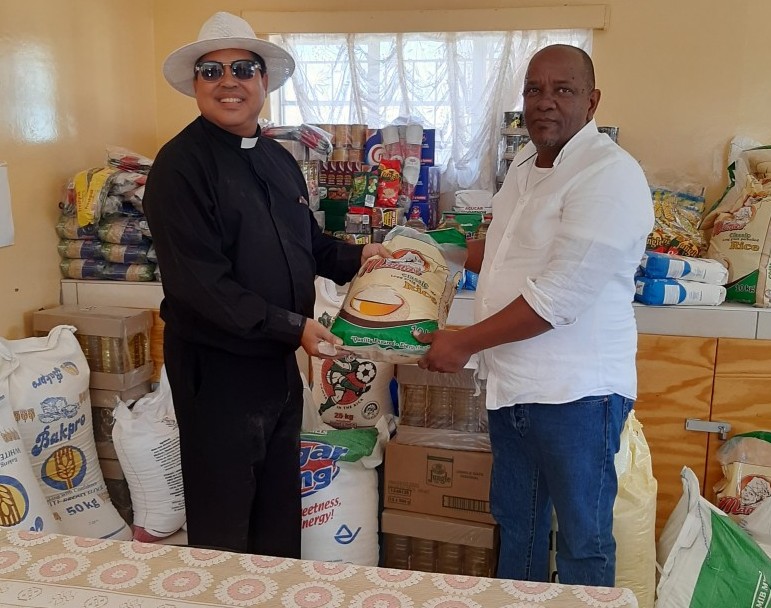 Pictured from left to right: