As published in the 30th Anniversary publication by Namibia Media Holdings (NMH) on 17 March 2020.

NMH: As Namibia celebrates its 30th anniversary, how would you describe the development of the country’s railway transport infrastructure since independence?

DM: Although the Namibian government has invested heavily in social sectors, it is equally commendable for having spent substantial resources in developing the country’s railway system and transport infrastructure in general over the years.

As you would know, Namibia’s history of railway service dates back to more than 100 years and today our rail network consists of 2,687 route-km of tracks and this number would increase as the rail infrastructure develops.

The Namibian railway network is linked cross border to South Africa via Nakop and links the major economic centres such as Windhoek, Tsumeb, Otjiwarongo, Grootfontein,  Walvis Bay, Ondangwa, Oshikango, Swakopmund, Mariental and Keetmanshoop with the Ports of Walvisbay and Luderitz. New rail routes  are being developed and existing ones are being upgraded.

As a highlight, in 2005, a new section the Northern Railway Extension stretching from Tsumeb to Oshivelo was opened by then President Sam Nujoma. The second phase of a stretch from Ondangwa to Oshikango on the Angolan border was completed in 2010 and our railway network links the Port of Walvis Bay with countries in the SADC region.

NMH: What role did D&M Rail Construction play in the development of railway infrastructure in the country?

DM: Well, as a hub of  railway engineers and technicians with unrivalled experience, we have always been part of railway development in the country since independence. Just 5 years into independence (1995), we were maintaining railway tracks at Namport and Rössing Uranium and by 1998 we had upgraded 16 kms of the main railway for TransNamib

In 2004 we worked on perhaps most ambitious project at that time – the 257 km new railway track on the Northern Railway Extension project from Tsumeb to Ondangwa as a sub-contractor for Lennings Rail Services/Aveng Rail a SA based company.

But we always knew we were destined to embark on projects on our own and so in 2005 we constructed the new railway track on the first phase on the Lüderitz Line Renewal Project for TransNamib– a distance of some 50 km .

And so it started. There was the 61km Ondangwa-Oshikango railway line in 2007; the current upgrading of the Kranzberg-Tsumeb line (261km thus far) and many more. We have constructed and/or upgraded over 600 kms of railway track and rehabilitated countless kilometres across the country. In addition, we have constructed, upgraded and maintained numerous sidings for private companies and handled tens of thousands of 36m long rails for various projects.

Our primary role is to ensure that the railway network is operational and that the trains keep moving. And so you will find our employees working on tracks needing rehabilitation at times when the trains are not running to ensure that no disruptions occur to the schedules. It must be noted that we have taken a conscious decision to make this a labour intensive  rather than a fully mechanized  business. And this has enabled us to employ over 500 Namibians in various capacities across our projects. However, the rate of production and quality of work remains on par with mechanized methods.

We are contracted by both Government and private clients, whose projects are equally important to the development of this country and so we are really playing the role of building our communities by connecting markets.

NMH: How is a well-maintained railway vital for the country’ development?

DM: The importance of a well-functioning railway system to the economic development of Namibia cannot be over-emphasised. Government’s vision to transform Namibia into a logistics hub connecting SADC to international markets relies heavily on this service offering to the transport chain. Namibia endeavours to have a sustainable transport system supporting a world-class logistics hub.  And having a good rail connection will translate to increased volumes of cargo movement, increased trade and increased revenue for Namibia.

Rail transport has the ability  to move high volumes of freight over long distances in a safe, energy efficient and cost effective manner. Fuel and chemicals, for example, are safer to transport by rail. Thus with a robust rail and road system connecting the Ports of Walvis Bay and Luderitz, Namibia has the potential to capture a significant share of transit volumes to SADC Countries. Therefore, there is greater need for Government to focus more on rehabilitating our aging rail network if Namibia is to achieve transport infrastructure development targets as set out in NDP5 and the Harambee Prosperity Plan.

NMH: Companies and organizations are increasingly becoming aware of the importance of investing in community welfare. How has D&M Rail contributed to community development in Namibia?

DM: As a socially responsible company, D & M has pledged more than N$2m to worthy courses during the past 8 years. To address the skills shortage in the railway construction/ maintenance sector we have established our own full time training school at Otjiwarongo through which courses many Namibians have qualified as railway track technicians and related occupations. Our Engineering development programs have also delivered a new generation of Railway Engineers who now successfully manage some of our projects.  We also invest in employee development – hence various programmes aimed at the upliftment of life skills of our staff are ongoing which result in a well-motivated and positive work force.

The sense of responsibility we have fostered for the social environment in which we operate is a key element in our business sustainability and therefore our CSI support focuses strongly on education and health and we continue to support school projects, especially in the Otjozondjupa region and provide generously to health facilities in the area. Just recently we also assisted in the housing development space when we helped the Otavi Municipal Council in clearing land for a new low-cost housing development.

We are currently developing a new comprehensive and focused CSI strategy, which will aim to assist broad-based organisations in various social upliftment endeavours.

Ed: The original interview can be found in the magazine at http://nmh.cloud/books/gjde 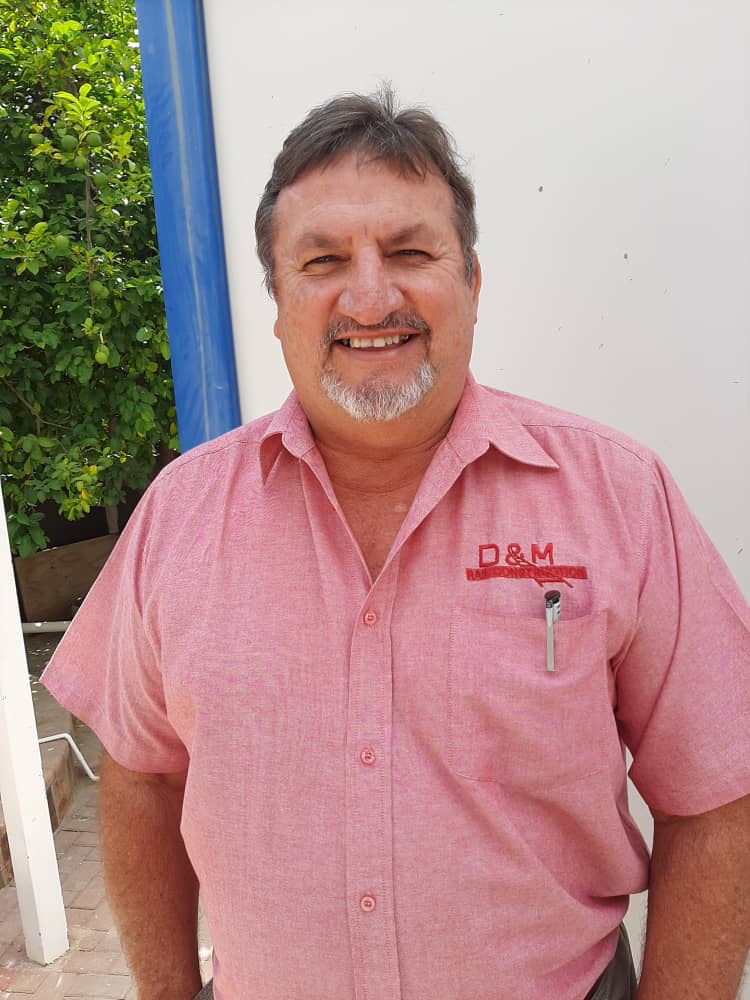