“It is not a man’s world….what men can do, women can do too!” seems to be the unanimous view of the women who work at D&M Rail Construction, Namibia’s premier railway construction and maintenance company. D&M Rail Construction has been rehabilitating railway lines across the country since 1994 and is engaged in what would generally be characterized as “man’s work – hard work, involving steel and iron and heavy machinery” required to keep the tracks on which our goods move, safe.

But the women of D&M Rail question that assertion, exuding quiet confidence and strength – both mental and physical – required to do the job. Some are in administrative jobs, which were ordinarily done by men for men; yet others are out in the field, laying tracks; whilst others find themselves in the mechanical yard, in charge of ensuring that the D&M rail fleet of motor-vehicles are  safe on the roads.

Esther Usiku is a married mother of 3 kids and is in charge of quality control of the ballasts; the tamping machine and earthworks on the railway line rehabilitation project. In fact, she is in charge of all things operational on her section including certifying work done and authorizing payment and supervising the contract for culverts. “I initially failed grade 12 in 2000, but improved my grades through NAMCOL at Walvis Bay and thereafter enrolled at the Namibia Institute of Mining (NIMT) in 2003, obtaining a Diploma in carpentry and joinery in 2007,” she says. Motivated by her lecturers to keep reaching for greater heights she took up employment at D&M Rail’s Oshikango project and enrolled for a B-Tech Diploma, paid for through her job attachment with the company. Today, she proudly beams as she says that the rest is history and all she wants from her children are to “do the best they can..!”

Then there’s Katrina Kapuundja –  orginally from Ondangwa who initially came to repair GRN vehicles at Otjiwarongo. She now makes sure that the D&M Rail fleet at Otjiwarongo is safe on our roads. Incidentally her work also involves repairing Police vehicles in the D&M Rail mechanical yard – a part of the company’s social investment endeavor. A mother of two, Katrina was inspired by her cousin to venture into what was then unknown territory. “She (my cousin) used to repair tractors and she encouraged me to try this trade and once did, I was hooked.”

She went on to study at the Rundu Vocational Training centre graduating in 2003. Now she wants to upgrade and study how to deal with the latest vehicles focusing on diagnostics. “And yes, this I want to do whilst I am working,” she says with the confidence that brought her thus far.

Johanna Abed recently featured on D&M Rail’s social/digital media platforms explaining her role as a qualified platelayer – one of only two qualified female platelayers.  She joined the company in 2017, studying at the company’s training facility in Otjiwarongo. After completing the course last year, she was sent to site. “They sent me on site as part of the  upgrading team – for a year. And then this year they decided they send me to work at the tamping machine,” she says.

Being in the field has not been easy, but Johanna is tenacious. “Sometimes its difficult since people underestimate me. But I never loose hope – I am trying my best. I am very thankful to D&M Railway Construction and am advising all the ladies all over the world – don’t think that you cannot do it. What a man can do,  a lady can do!”.

A feisty lady who did not take no for an answer is Jasmine #Nukuris who came to D&M Rail’s Otjiwarongo offices fresh out of school, starry-eyed and looking for work. At first, she got the usual “sorry, we do not have any vacancies at the moment” response but she did not let that stop her. She persisted, returning to the office week after week until, one day she got a call that changed her life forever She resigned from the job she was at within 24 hours and started her new career at D&M Rail as Office Assistant to the HR Manager and Accountant. When the Accountant left for Windhoek to take up a position there, she swiftly moved into that spot, assisting with all kinds of accounts related activities. Following the work philosophy of “first in and last one to leave the office” got her noticed and a promotion to senior clerk soon followed. “In 2016, I was awarded a bursary and obtained my Certificate in Accounting & Auditing soon followed by a diploma in 2020. Another bursary soon after enabled me to embark on a BBA Degree”, she says.

Just a short while ago, she was still the Assistant HR Manager also responsible for Payroll, overseeing financial activities at Otjiwarongo and liaising with the Head Office in Windhoek. But now, with the secondment of the HR Manager to a new position on a new project in Walvis Bay, she graciously moved into those shoes.

Married to a Pastor, Jasmine says her journey has been one of grace. “God calls and qualifies the unqualified. I have always wanted to study and be the first in my family to go to University. God made that possible. Now I trust on Him for the next stage of my life – that of owning my own HR firm one day. But for now, I must grow slowly into my position,” Jasmine concludes graciously.

For the company’s Chief Executive Officer, Dawie Moller, himself a railway engineer with decades of experience, the women of D&M Rail Construction have opened the doors themselves. “Railway construction has always been a man’s domain. But the world is changing and we too must change with it. Our female colleagues stepping into their own and taking up their rightful place in the industry and indeed in the world is something that should happen and which we welcome. We respect their tenacity and professionalism which adds value to our professional endeavours and indeed their presence adds value to our personal lives,” he concludes.

D&M Rail Construction has 47 women working on the Kranzberg-Tsumeb project, serving in various capacities ranging from Management to General Worker. In addition, a number of women are to be employed on the Walvis Bay project due to start soon. 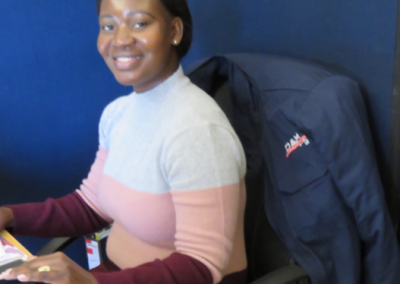 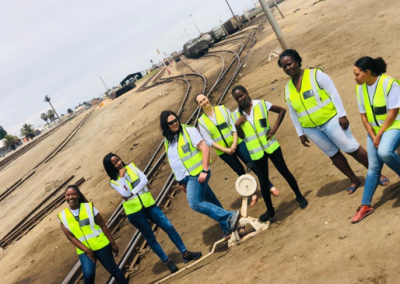 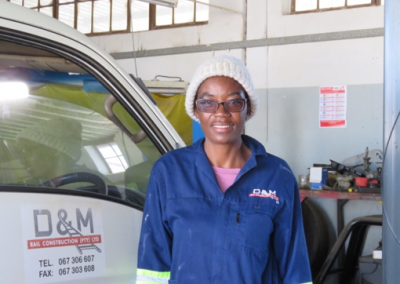